IEEE Region 10 Meeting this year was held in Chiang Mai. This is an annual event, and formerly held in the city of Lapu Lapu, Yogyakarta, and Kolkatta. Besides all the Section Chairs in Asia Pacific, and the Officers of IEEE Region 10, also attended some VP of IEEE HQ. I recognised some familiar faces was, especially from the previous meetings in Lapu Lapu and Yogya. But none of the IEEE Presidents was present. But it’s OK. I’ve already meet Prof Peter Staecker, the Prisident, the previous weekend in Tanjung Benoa.

This year, the IEEE Indonesia Section received a special invitation to obtain the 25 Years Banner. When the invitation was received, M Ary Murti, who was serving as the Section Chair decided to invite all the previous section chairs to present in Chiang Mai. And all the former chairs agreed to attend. Later, the leadership was handed over from Ary to me (via election, certainly). So this time, I was the primary delegation of Indonesia, and the former chairs be the secondary delegations.

The flights we used were Garuda Indonesia for Jakarta – Bangkok, and Thai Airways to Bangkok – Chiang Mai, on March 1. We landed in Chiang Mai at night, and went straightly to Le Méridien. The meeting would began on Saturday morning, March 2, 2013.

IEEE formal meetings use the protocol called “Robert’s Roles of Order” that is used in some parliaments. This is an interesting protocol, which facilitates shared decision-making more effectively. On the first day, Region 10 evaluated the Budget 2012, proposed the Strategic Planning, and displayed the work plans of the units, as well as support from HQ and Region 10 to Sections. We also learnt best practices from the various Section and other task units. The activities of Women in Engineering (WiE), students, and GOLD (Graduated on Last Decade) were highlighted. Some incentives were also offered to enable the specific activities in the Section. 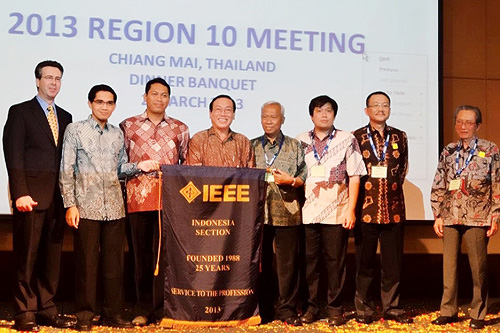 The second day was started with a petition to award Prof Marzuki, a leader in Region 10 who passed away last year due to a long illness. In the midst of the pain, he did not stop doing organisational dan professional tasks, including supporting many activities for the Indonesia Section. Indonesia Section specifically stated a grief at the previous night. Then reviewed the Budget Plan for 2013, the report of Tencon 2012, and plan of Tencon 2013, and R10 Congress 2013 (Hyderabad).

I talked briefly to the Region 10 Director, the always joyous Prof. Toshio Fukuda; invited him to be the Keynote Speaker of the IEEE Cyberneticscom in Yogyakarta later this year. He confirmed. 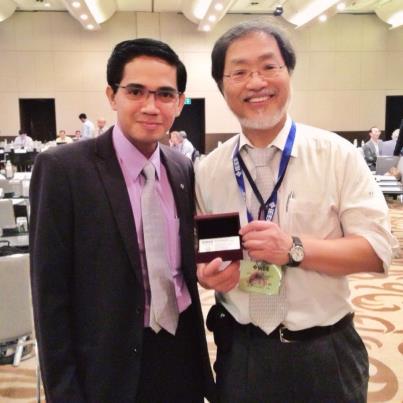 Then presented the information and policy on the administration of Section and units under it. There were some new things, and some important repetitions. The meetings were closed after midday. After that, a brief tour around Chiang Mai.