Last week, Indonesia hosted some regional events: SEA Games, ASEAN Blogger Conference, ASEAN Summit. These days, the IEEE Region 10 (Asia Pacific) carries out its official annual conference IEEE TENCON on Sanur Beach, Bali. This conference has been prepared since a couple years ago, starting by submitting the proposal from Indonesia to the IEEE Region 10, bidding, recording in the IEEE, and the processes that include the calls for papers, paper reviews, event planning, and event organising. The whole process has involved senior academics in various parts of the earth. The event is organised by the IEEE Indonesia Section and University of Indonesia. Two IEEE society chapters are also involved as technical sponsors: the Comsoc Chapter and the MTT / AP Joint Chapter. Since the event is held Denpasar, Udayana University sends some volunteers to support the conference. Busy days :).

I jumped from Jakarta to Denpasar last Sunday. I saw the valley in the vicinity of Mount Ijen, Bali Strait, 10 minutes southwest coast of sunny, clear, sloping, sandy white, soft, and wavy beaches, and then finally the Ngurah Rai airport. Apparently ASEAN Summit still left some activities, so we had to revolve around Bali’s southeast coast for 40 minutes before landing. Then travel overland to Sanur Beach: Inna Bali Beach Hotel. 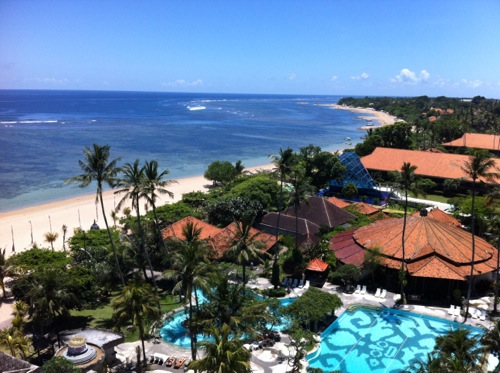 Unlike 2009, this year I can not seem up to enjoy the magnificent nature and culture of Bali. Representing IEEE Comsoc Indonesia Chapter, I had to prepare a tutorial session, then assist the event organising. Even today! 🙂

The tutorial was held on Monday, November 21 at 10:00 sharp. Prof Dadang Gunawan opened the session; then I took over to deliver a lecture on Digital TV and IPTV. My presentation focused on the network architecture, standards, how-it-works, services and content, and to the issues of convergence. Quite a lot, considering the time the tutorial was quite long. The next tutorial session was then filled by Mr Satrio Dharmanto Ms Agnes Irwanti, with emphasis on migration into DigitalTV.

The conference was officially commenced on 22 November. As the organising chair, Dr. Wahidin Wahab open the conference with his typical fun and exciting speech. The plenary session was then filled by four keynote speakers, with two moderated by Mr. Arnold Djiwatampu (himself the general chair of the event), and two by me. 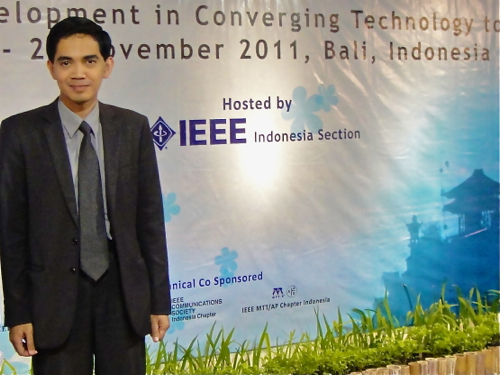 The theme of the keynote speakers were very interesting. Prof. Nurul Sarkar discussed a breakthrough in engineering education strategies. Prof. Ke Wu explored IC Substrate (SICS) that are applied for future electronics and photonics in GHz and THz scale. Prof. Rinaldy Damini detailed energy scenarios taken by various countries after the Fukushima nuclear disaster. And Prof. Jong-Hwan Kim explained and demonstrated the robot-that-thinks (RTT). More than that implied by the titles, each presentation provided interesting inspirations. Prof. Ke Wu, for example, explained by pictures the history of waveguides: metals, coax, intrachip waveguide, etc. Meanwhile, Prof. Kim, who is also called the Father of Robot Football, explained the philosophical level of how the minds are recomposed by contextual info, fuzzy logic, and social intelligence.

After the photo session, the conference was splitted into seven rooms, each with its specific focus. I chose Room 5, which is focusing on the architecture, traffic, and other aspects of the wireline and wireless networks. In Room 5, dozens of papers are presented in several sessions from Tuesday to Thursday (today). Each presentation sets out in 20 minutes, followed by questions and answers. The theme is no longer a matter of philosophy or research direction, but instead the details of research results. The presenters are researchers, engineers, geeks, etc, so you can imagine how their presentations are. Just totally like me 😀

There was a dinner session, for networking while observing a small part of Balinese culture. There were a couple minutes (only) to walk to the Sanur beach not far from the hotel. But the rest are continuous controlling on the event.

Hopefully IEEE Tencon will result well, improving the good reputation for Indonesia that is capable to organise an international academic event almost with no sponsor, improving the interests for the Indonesian academics and engineers to consistently do the researches, and transforming Indonesia to be a respected technology innovation and development country. 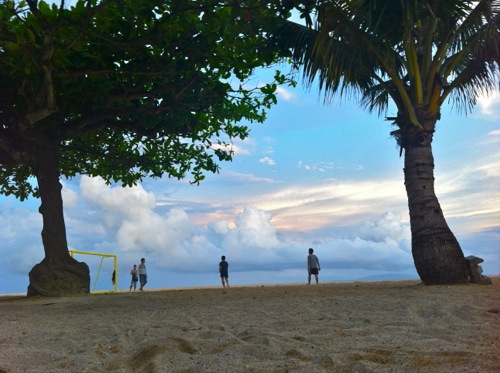 The next Tencon will be carried out in Cebu and Mactan islands in the central part of the Philippines. See you next year in Lapu-Lapu city!