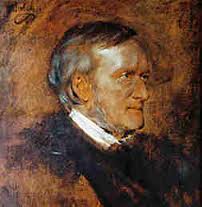 Returning in the afternoon, I stretched myself, dead tired, on a hard couch, awaiting the long-desired hour of sleep.

It did not come; but I fell into a kind of somnolent state, in which I suddenly felt as though I were sinking in swiftly flowing water. The rushing sound formed itself in my brain into a musical sound, the chord of E flat major, which continually re-echoed in broken forms; these broken chords seemed to be melodic passages of increasing motion, yet the pure triad of E flat major never changed, but seemed by its continuance to impart infinite significance to the element in which I was sinking.

I awoke in sudden terror from my doze, feeling as though the waves were rushing high above my head. I at once recognised that the orchestral overture to the Rheingold, which must long have lain latent within me, though it had been unable to find definite form, had at last been revealed to me.

I then quickly realised my own nature: the stream of life was not to flow to me from without, but from within.