Memristor is too significant not to discuss. But, wow, this is my last day in the office before my leave. So, here’s a Spectrum article discussing the matter :). 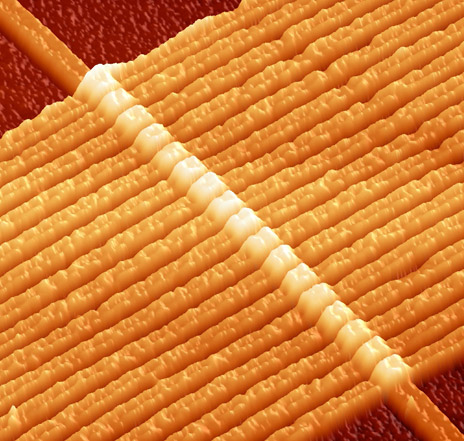 The memristor is as fundamental an electronic component as the resistor, the inductor, and the capacitor. Still, it hasn’t even been two years since a group of researchers at Hewlett-Packard Laboratories, in Palo Alto, Calif., reported that they were the first group to produce such a component—which means there’s a lot more to learn. But in research reported last week in Nature, R. Stanley Williams and his collaborators at HP provided a glimpse into what they’ve learned so far.

The component’s use in computer memory was a foregone conclusion. The memristor can reversibly change its resistance depending on how much current flows through it. The researchers’ surprising new discovery is that a memristor can handle either data storage or logical computation depending on the amount and duration of the current sent through it. Three memristors can complete a NAND operation, the researchers report, so any Boolean function can be implemented if you string enough of the devices together.

But Williams is quick to note that using memristors as pale imitators of the logic gates common to silicon circuitry is probably not the smartest thing to do. ”Silicon naturally wants to implement the NAND function,” says the HP Senior Fellow. A memristor, on the other hand, wants to perform something called the material implication, or IMP, function, says Williams. Logically, IMP can be thought of as pimplies q, or if p then q. The reason IMP is such a natural for the memristor, according to the HP researchers, is that IMP is easy to implement with a device in which resistance—rather than voltage or charge—is the variable physical state.

One of the conclusions Williams and his team have reached is that ”it’s important to take what nature gives you.” To do otherwise would be like forcing basketball star Shaquille O’Neal to squeeze his 2.15-meter, 147-kilogram frame into a race car simply because you know more about speedways than hard courts. Williams explains that you could use silicon components to carry out IMP operations, ”but you’d have a very complex and ugly circuit.” The converse, he says, is true for the titanium dioxide–based memristor. So in a sense, HP’s results serve as a brief how-not-to manual aimed at preventing the engineering community from wasting this newly created component’s potential. The HP team says it has already proved that memristors using the IMP function are capable of universal computation and can compute with circuitry no more complicated than whatever you can produce by stringing together NAND gates in silicon.

The HP researchers say there is still much work to be done before a commercial version of memristor logic appears. ”But we are learning at a tremendous pace, discovering new things, such as the fact that the memristor can do much more than just storing a bit,” says Williams.