IC3INA (International Conference on Computer, Control, Informatics and its Applications) is an annual conference, organised byResearch Center for Informatics, Indonesian Institute of Sciences (LIPI). Since 2013, the IEEE Indonesia Section co-organised this conference as technical sponsor. This year, IC3INA was conducted in Bandung, October 21st-23rd.

I attended this conference as one of Scientific Committee member, and as the chair of the IEEE Indonesia Section. Last year (2013), they made me the moderator of all keynote speech session on opening day. But this year (2014), they only wanted me to present a 5 minutes speech as an IEEE representative.

Here’s what I read:

It’s always enchanting to be around the community of scientist, researchers, academicians, and technology professionals. Representing the IEEE, and especially the IEEE Indonesia Section, I would like to express our gratitude to be involved for this distinguished event, the IC3INA 2014 in Bandung, Indonesia, organised by LIPI.

We have known that the IEEE was established more than 125 years ago. This organisation is a home for scientists and engineers from the industrial world and academic domain to synergise their idea, and to collaborate their efforts to understand more about the nature and to engineer it toward a better life. In Indonesia, the Section was established only 26 years ago, and is now actively fostering the academic and professional engineering activities in Indonesia with its 10 chapters representing 15 different fields, and 7 student branches. It is a place for the engineering ecosystem to work in partnership and collaboration to enhance the dynamics and quality of our researches, our academic and professional works, for our mission to advance the technology for humanity.

The second decade of the 21st century has been witnessing new paradigms for the Information Technology. The Internet, which has previously revolutionized the communication and interaction among people, has started its next evolution to be the Internet-of-Things (IOT), with the ability to connect any digital entity or virtually anything to the network of information and knowledge. Information processing does not stop with just doing computation over data input, but would also enrich the information with aggregation of various supporting knowledge, with context-awareness. Big data technology allows the aggregation of large amounts of information from various sources intelligently to obtain results that are sometimes unpredictable.

But the challenge is to develop and to implement those new computing paradigms in real applications to enhance the value of human life. While we carry out researches on Big Data, we keep in mind that this is one of the key technologies to improve the quality of life. We expect better understanding to the universe and human, better education approach, personalised health care, smart city integrated with ubiquitous sensing networks, smart businesses that understand their customers in person, better approach for environment conservation, and others. The interesting thing about Big Data is the necessity on its implementation to maximize the role of the ecosystem, to involve all stakeholders in designing a disruptive lifestyle with this technology. 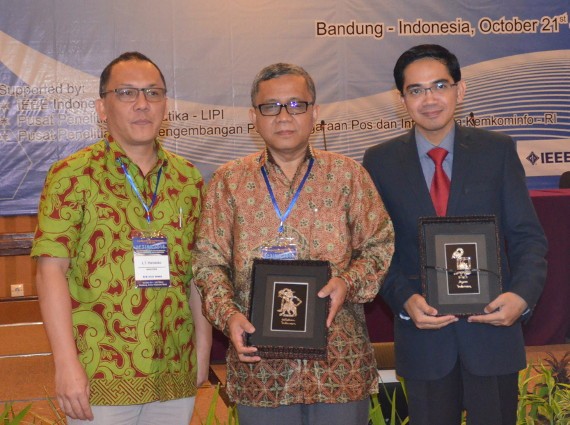